The next query on our list is LIKE. This is used for finding patterns when we don’t know the exact data.

Q1. How can I find a movie that’s thrilling? Finding thrillers through the film description.

Let’s say you’re browsing the sakila database, and you want to look up some information about the cities in the database. You can start with:
SELECT * FROM `sakila`.`city`;

If you wanted to look up a specific city, like New Delhi, you could add WHERE city=‘New Delhi’ to find information on that city.

But let’s say you don’t quite remember the name of the city. You know it has the word “New” in it, but you’re not sure of the second half. In cases like this, we need the query LIKE.

So we want to find Thrillers. If there was a column named “GENRE” we could use the WHERE query. But in this database, the genre of the movie is in the description column. So we need to get creative. Let’s change “Thriller” into “thrilling” and search the descriptions. Try writing “title, description” after SELECT and ‘film’ after FROM, like this:

⛔️STOP! You’re going to get an error. This is because we didn’t put the single quotes ( ‘ ’ ) around thrilling. But even when we do, you won’t get any results. Why you ask?

🔑 In SQL, the percentage sign ( % ) and underscore ( _ ) are called Wildcard characters.
📨 % is used when the number of characters/words that surround the term you’re searching doesn’t matter.
📩 _ is for selecting something exact, and you want an exact match.

For this example, we need %. So let’s try it again:

Nice! Here are some examples of the wildcards.

🔑 LIKE checks every data for the ‘whatever’ that you’re searching for, so it can take a lot of time to process when dealing with a large amount of data. If the amount of data is substantial, it’s better to avoid the LIKE query.

📰 Today’s example scenario requires you to apply previously learned queries in various tables. We want to find the addresses of all our customers that live in South Korea. We’ll be using three different tables to do this: country, city, and address. We’ve mostly been using the film table until now, so it might be hard to find data in other tables. Let’s try this query first:

First, let’s find the country_id of South Korea in the country table. We don’t want to scroll through all this new information to find it, so let’s try a query. An excellent place to start is to search for a pattern, so let’s try plugging in WHERE country LIKE ‘%korea%’ because there may be many values that contain the word ‘Korea.’

Once you run this query, you’ll see there are two results: South Korea and North Korea. The one we want is South Korea, so make a note of the ID.

Now that we have the ID number of South Korea (country_id=86), we can go to the next step. This time we will look at the cities of this country in the city table. Add city to the SELECT query and change the table name for the FROM query to city. We’re also going to keep using the WHERE query, so go ahead and plug in the country ID at the end.

In our first step, we found the country code for South Korea (86), and we used that in the second step to finding city ID numbers. So in the address table, you only need to search for the addresses corresponding to these city IDs. An easy way to use them is to combine WHERE and IN, as we just covered in this tutorial.

There! Now we have the addresses of all customers in South Korea. Below we’ve provided an image of all these queries together. You can run them at the same time to compare the information. 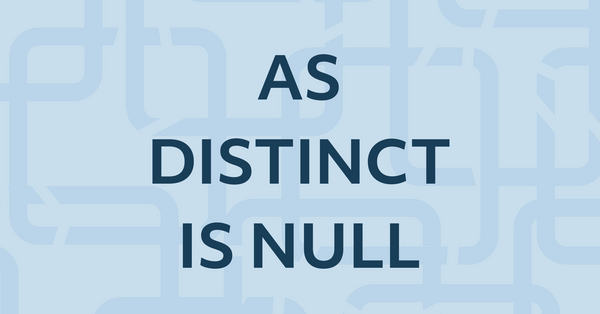 Today, we will cover AS, DISTINCT, IS NULL. They’re pretty simple and very commonly used, so let’s get started. 📌AS: used to rename columns 📌DISTINCT: used to see

If you’ve been following our tutorials, you have a good grasp of some basic SQL queries. This time, we’re going to cover three new queries. AND, OR, and